Ireland was for many centuries a colonial domain of the Kingdom of Kemr. After decades of agitation—the Irish themselves would say centuries—in 1922 the Irish won their independence from Kemr and formed the Irish Free State (Saorsdát Éireann). Gaelic is the everyday language, though Brithenig is still taught in schools and is important still for economic purposes. After federalisation in 1956, which came about as a consequence of the second civil war, the country came to be called the Irish Union or in Gaelic, Aonsdát Éireann.

The AÉ has a (nominally) unicameral legislature, known as Dáil Éireann. It sits in Caislean Chill Chainnigh and is considered a continuation of the Oireachdas Comhaontasgach (Confederate General Assembly).

In addition, Coisde Cónasgach (the Federal Commission) sits as the de-facto upper house. Each Taoiseach from each of tuatha has a seat on it. The Uachdarán chairs the council, but normally doesn’t directly participate in the debates. This council does not run the country, but acts as an advisory body to the sitting government. This body is also charged with protecting the fundamental law (Bunreachd na hÉireann), through its right of veto on legislation.

There are a number of districts which, while not considered large or populous enough to be considered a territory, are independent of the surrounding territory in all matters. Theses are known as Ceantair Féinrialach (autonomous districts). They have all the right and priviledges of a territory, but do not have a seat on the Federal Commission. There are currently two such districts, namely Ceantar an Phobail Féinrialach Eíceatópaic Corcaí and the island of Montserrat. Montserrat is provisionally an autonomous district following its accession to the AÉ, but will most likely become a territory as soon as its constitutional status is fully resolved. 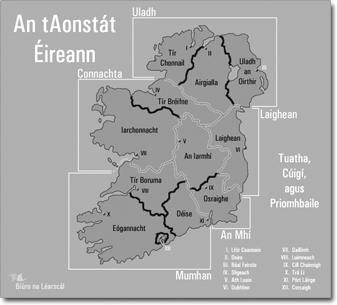 The country currently has a population of approximately twelve and a half million (est. 2004). It is a world leader in Electronics and Computing. Other major industries include Pharmacuticals, Financial Services and Agriculture.

Please note: what follows is no longer canon and has since been superceded. It remains here until such time as I can get at my notes on the subject and update the details.

First, let’s get a few things out of the way. The assasination of Michael Collins in Beal na mBlath did not happen ATL. Instead he lived to become one of the nation’s most respected statesmen, known for his work as a social and economic reformer. In fact, the Civil War was a completely different beast ATL because there was nothing even remotely like the North to cause the same degree of friction between the protreaty and antitreaty factions. In fact, Cork and the area surrounding it was awkward enough with those ecotopians and never really figured greatly in the war.

ATL there were two civil wars in close succession. So close, in fact, that ATL, they’re usually not differenciated between.

The (first) civil war was between the protreaty forces, lead by Collins, and the anti-treaty forces, nominally lead by de Valera, though really under the control of the Army Executive. ATL, the Irregular forces crumbled far quicker than OTL, having even less support than in OTL.

In the disarray of the first civil war, unionist paramilitary groups, mostly concentrated around the area of Dublin, formed an alliance to try to win independence from the Free State and become part of the FK once again. This is actually what finally brought the first civil war to a close some time around late July and early August of 1922. Regulars and Irregulars saw the seperatist forces as being a far greater threat to the nation than either of each other was.

Fighting was centred around the area that would later become known as Laighean. The second civil war raged until around June 1923, at which point Unionist forces and Statist forces brokered a peace deal which that turned the Free State into a federal republic of five provinces and one autonomous region that exists today.

And by the way, I’ve no idea who blew up Mallow Bridge… Actually, scratch that. My current theory is that the bridge was blown up by the father of former Poet Laureate Michael D. Higgins.

The main unit of currency is the Líre (pl. Líreanna). Here’s a breakdown of its denominations:

Deneair is the plural form of Denear, by the way. The Denear is colloquially known as the Ceanog (pl. Ceanoga), much like the word penny is sometimes used for cents in the US OTL. The exchange rate between the FK Pound and the AÉ Líre is £1/- (FK) = £1/1 (AÉ), with a metal content of 1750 grain pure silver. It is used as legal tender in Ireland itself and Western Peninsular Florida (for the duration of the occupation), and alongside the Commonwealth Pound in Tír Ghearoinn.

The design of the coins is not dissimilar either to their design OTL, but the obverse have a rather large cross on them, overstruck with a smaller harp in the centre, a design inspired by some of the old viking coins. The reverse uses Percy Mecalf’s animal designs, just like they used to OTL. The one dissimilarity is that all the animals point the same direction ATL.

All gold coins are commemorative.

Currency is controlled by Federal Currency Commission. This body controls which banks are allowed to issue notes, though in reality the only banks that do are The People’s Trust in Cork, the Provincial Bank of Ireland and the Bank of Leinster. The obverse of the coins is allowed to vary according to the minting authority, but this doesn’t happen in practice.

An Grianghal, the Sunburst, (or An Gal Gréine as it’s known OTL) is the flag of Aonstát Éireann. Just as an aside, ATL English-speakers call this flag The Grennial Flag, and the adjective ‘grennial’ is used there to describe flags of a similar shape (a sun with rays emenating from it).

The AÉ has one overseas protectorate—Gereinti (roughly Victoria here). Essentially, a special relationship exists between Ireland and Gereinti where the Australasian Commonwealth cannot pass legislation affecting Gereinti without the advice and consent of the Irish government.

This situation came about shortly after the AÉ achived independence. When it did, the colonists, who there were mostly Irish or of Irish descent, threw up a ruckus to achieve self-determination themselves and closer ties to the mother country. The end result was that the colony stayed within Australasia, but partial dominion was handed by mutual agreement to the Irish. The AÉ has a say in the relations between Gereinti and Australasia, but not being an Irish colony, cannot interfere directly in internal Gereintian matters. Essentially, Ireland is a guarantor of Gereinti’s autonomy with respect to the federal government.

There’s quite a bit of co-operation between the two countries. Citizens of Gereinti, while not having Irish citizenship, have virtually all of the rights afforded to Irish citizens when living in Ireland, and visa versa. Add more…

ATL
(in) Alternate Time Line
OTL
(in) Our Time Line